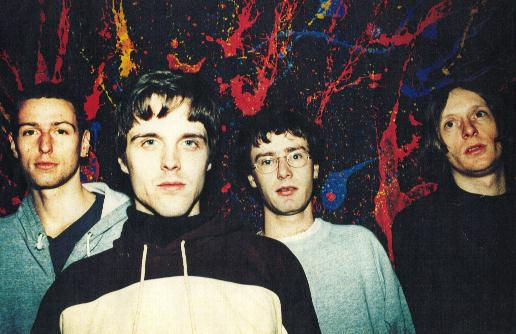 Ged Lynn and Lars Gabel first met at a Cast gig at the Brookhouse pub in Liverpool, late December 1994. Lars, arriving to study in Liverpool from his native Hamburg, and Ged, on the lookout for his next musical adventure after leaving The Stairs, hit it off straight away and soon found themselves writing and playing together on acoustic guitars. Needing a name, Ged came up with The Living Brain – ‘the idea was, you couldn’t walk down the street without one, so you definitely couldn’t do a group without one’ – and the pair played their first gig at Brian’s Diner in April 1995, followed by a support slot with Cast at The Picket. That summer, the duo took off to Berlin for more gigs and came back with a master plan.

The remainder of 1995 was spent playing live and trying to find a suitable rhythm section in Liverpool, with several ‘on loan’ musicians (Barry Sutton, Budgie and Lee Webster) stepping in when needed. With the set list expanding, a session for the nascent Crash FM was recorded at Vulcan Studios in November 1995, becoming the first documentation of the full band.

April 1996 saw James Pagella joining the band on drums, followed shortly after by partner in crime, Tom Sumnall, on bass. With a fixed line up now established, The Living Brain spent most of their waking hours rehearsing and gigging; the midnight servings of veggie curry at Brian’s Diner are still remembered by many, even if the line-ups aren’t.

Gigs, recordings and van crashes followed and, in 1999, the band released the Life Sentence On Planet Earth album on their own Medical Records label.

The following year saw Lars leave Liverpool for a new life in Japan, via Brighton, and Matt Lord join the band on guitar. Bad Present Day was recorded and released during this time, although the band was soon to implode and The Living Brain Mk I ceased to exist by early 2001.

With band members off doing their own thing (Ged with Rhombus of Doom supporting The Coral; Tom & James with Zukanican and running The Kif in Liverpool; Lars starting a family in the Far East and New Zealand), the band was in a hiatus. Sporadic reunions in 2003, 2004, 2012 and 2016 took place when everyone found themselves on the same continent and the last couple of years have seen the most activity in the last two decades. What could it all mean……?

The Living Brain have returned in 2020 with the release of Two Sides of The Brain LP, a retrospective look at the band’s recorded history.